From Streamerpedia
Jump to: navigation, search

TSM Dyrus is a professional League of Legends streamer on Twitch for Team Solo Mid.

Since the beta phase of League of Legends, Dyrus has been a dominant player, originally playing support for one of the first competitive LoL teams, All or Nothing. After AoN disbanded, Dyrus joined Epik Gamer as the team's top laner, and gained massive popularity from streaming and the relative success of Epik Gamer at LAN tournaments. He moved in with TSM, whose gaming house was in New York, to pursue a full time gaming career but still played for Epik Gamer. After TheRainMan resigned from Team SoloMid, TSM was left without a top laner and Dyrus took this as a chance to join them. After receiving his former team's blessing, and due to being physically available at the time, Dyrus resigned from Epik Gamer and now plays top lane for Team SoloMid.

Renowned for his laid back, nonchalant attitude and his top lane gameplay, Dyrus' talent comes from his long experience of playing the game.

On October 14, 2015, Team SoloMid announced his retirement but he will stay with the team as a streamer.[1] 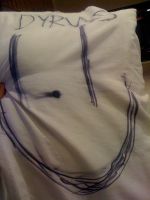 Dyrus had purchased a $2 white pillow some time before September 2012, on which he drew a face. It was autographed by Chaox on the bottom. The pillow became a sort of pet/security blanket for Dyrus, as he took it everywhere with him, including international trips and League of Legends competitions.[2]

The pillow was quite popular among his fanbase and was a signature trademark of his, until LCS commentator Phreak ran into him on an escalator and asked him if he could have Mr. Pillow. Dyrus agreed and gifted Mr. Pillow to Phreak, with whom Mr. Pillow has remained ever since.[3] On July 13, 2013, Dyrus's girlfriend gifted him with a large plush penguin, presumably as a replacement for Mr. Pillow.[4]

Ever since he was a child in kindergarten, Dyrus was "the nice kid". This was back when he was living in Hawaii. He was bullied a lot by a lot of his classmates because he was unconditionally nice to them. In second grade he took anger management because he lashed out at a fellow student who had bullied him, and he cut his ear with a pair scissors. Though this didn't do any serious harm to the child, Dyrus's father believed this to be a very serious incident and wanted to get help for him, to prevent it from recurring. When he discovered League of Legends he started using it as an outlet for all his rage, and it worked great until it became his job and he technically lost his outlet. This led to him getting banned once on the West European server for lashing out against European junglers, in belief that they were conspiring against him.

He acknowledged his mistake and improved his behavior shortly after. He even went as far as to make several apology videos about it. Currently he uses Anime, Manga and watching other people play video games as a rage outlet. He also plays a lot of Dance Dance Revolution as well, which he enjoys because it engages him physically, which he needs since he quit playing basketball in high school and hasn't had any other serious physical exercise in his life since.

When he first started playing Call of Duty, a few matches in he got a 30 kill streak, ran out of ammo and tried to knife a player for the 31st frag. He got shot in the back, which ruined his streak, and out of rage he slammed his glass coffee table, driving glass into his hands. Furthermore, he has destroyed many keyboards and chair out of rage throughout his League of Legends career. He has also experienced a lot of friction with his teammates, particularly Reggie who was in charge of scolding him where appropriate. They have argued quite loudly in the past about in-game mistakes.